Your area channel defines your personal safety radio area, but does not limit it.  One recommendation is that your radio always be set to include the national calling channel in its scans.  That channel is not used for conversations, so it is free of chatter.  Anyone can broadcast a call, and once such a call is answered, the parties agree to go to a different channel for their conversation.  If you are always listening, you may hear calls from people unaware of SCOOPR, or from outside your own channel area, that may still be important.

Apart from the national calling channel, assignment of local channels to areas is not official and does not have to obey any regulations; it is purely voluntary.  Here is one way it can happen, a procedure that could be applied anywhere on earth: The geographical shape of your area, and the centers of population, should be taken into consideration.

My county’s ham club has typically about 30 members. It was surprising to find that this one county has 500 currently licensed hams. And certainly a very large percent of these hams will have handheld transceivers already, because that is by far the simplest and least costly way to start enjoying the hobby. It seems that a SCOOPR system would be a natural for this area, and I am going to use Napa County as a model for starting SCOOPR.  I strongly suspect that most other parts of the country also have large numbers of licensed operators who are “under the radar”.

Here is a breakdown of the registered address locations of the active license holders in the county, found by querying the fcc.gov database for licenses expiring after the search date:

Now, there have to be some areas defined, preferably of a size such that any HT in one area can contact any other HT in the same area.  One starting point is to use map areas defined by the “Maidenhead Grid”, a system used a lot by radio hams communicating over long distances.  One of these grid “squares” (actually more like rectangles) in northern California is about 4.5 miles wide (east-west) and 2.9 miles high (north-south); a little smaller than ideal, perhaps, but not bad.  Even at one corner of such a square, someone at the diagonal opposite corner will be about 5.4 miles away.  Therefore, given the nearly guaranteed line-of-sight range of a typical HT, anyone in the area should be able to hear and speak with anyone else.  Here is a map of the grid squares superimposed on the county, with dots indicating where operators are thought to be located: 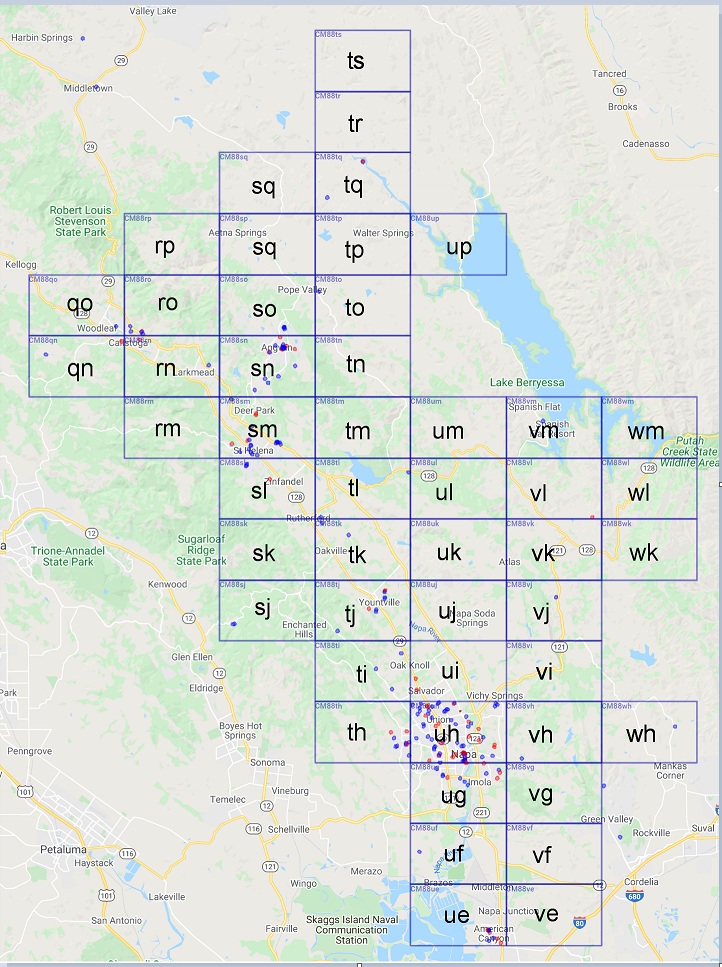 The letters in each rectangle are the last two characters of the full grid reference (for this county, the first four characters are always CM88).

There will be eight similar areas bordering on the one you are in.  Most HT’s in those squares will have a good chance of communicating with you too; but for local area messaging, maybe that’s too far (you might not need to be wakened in the night by news of a fire 10 miles away).  However, we have other simplex channels available; and if all of those adjacent areas are using channels different from yours, you will not be disturbed.  That is, unless you want to be: remember that your radio can be scanning any channels you select, so it will receive signals from those chosen channels.

That larger region (region 2)  – about 13 miles east-west and 9 miles north-south — includes a total of 9 channels.  Expanding that the same way, to include every square bordering region 2, would add 16 more squares, so 25 channels would now be in use.  There are not that many channels available, but an area that big (about 22 by 14 miles, and a diagonal of 27 miles) is probably too big to guarantee communications between any HT’s inside it.  In reality, users in areas 15 or 20 miles apart can be on the same channel without causing interference.  Also, collections of squares need not form a bigger square: they could be assembled to fit any area shape.  If the population is low, two or more squares might  even share a single channel.

Here is a starting system for Napa County using those Maidenhead grid areas:

Because the county is not square, channels can be the same in the northern and southern areas, because they are about 25 miles apart.  Combining some grid squares in flat areas (where HT range would be greater), 20 channels will serve regional safety areas all over the county. Safety areas with higher populations of radio operators may want separate channels for smaller subdivisions, just to avoid excess chatter.  This would not compromise safety messaging in any way, because anyone can transmit on any channel – there is no requirement to communicate only on your local channel, and messages can be passed between areas at any time.

Starting in any area, messages can be relayed from one end of the county to the other with only a few “hops” from one area to the next.  (Remember, this is only needed for those rare times when repeaters are not in service; at any other time, a repeater can be used to reduce or eliminate any need for relaying).