3. Your Own Personal Radio Station

If you are still following this series, you understand that no matter how reliable and convenient our cellphones are, at the worst possible times they can fail – along with the electricity supply and everything dependent on it.  Even living in the City of Napa, during the 2017 fires my home and area lost all cell coverage, electricity, internet, TV, landline telephone, etc.  There was simply no way to tell our loved ones elsewhere that we were OK.

These days, a useful two-way radio that fits in a purse or pocket is not only a reality, but also inexpensive and readily available.  Even 8-year-old kids pass the operators’ license exam, so you can do it too if you decide it is important.  Can you really afford not to?

First, let me limit the discussion to a very specific kind of radio: HT’s (Handheld Transceivers) for the 2-meter wavelength band (136-174 MHz).  Radios transmitting on that part of the electromagnetic spectrum can be small and portable, because the shorter the wavelength, the smaller the antenna and components needed to send out the signal.  Unlike longer waves, these radio waves travel in almost straight lines, blocked by major obstructions like hills, so they are called “line of sight” transmissions, a bit like the beam from a lighthouse.  The limited range has a benefit, though; it allows the same frequencies to be used in different places without causing interference.  Because the number of frequencies available is absolutely limited by the laws of physics, this is very important.  Cellphones are radios; just imagine how few cellphones there could be, if every one sent a signal heard around the world!

By the way, cellphones do not usually speak directly to each other.  They contact cell towers, which repeat the signals to central switching stations that send them onward to their destination.  If the cell towers fail, you have absolutely no possibility of communicating with anybody (and you may be relying entirely on a single vulnerable cell tower).  Contrast that with the HT’s I am recommending for your backup use, which communicate directly with any similar radio, anywhere within range, without depending on anything in between.  Here’s what they look like: 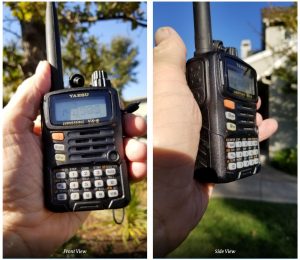 I recommend you buy your 2-meter HT soon.  There is a lot to do with it before you start transmitting.  You will see them on sale for anything from $30 to $500.  Do not feel you need a costly one – they have certain features you will value, and many more that you will never use.  Between $40 and $99 will get you a very capable HT you will find useful for many years.  The major online retailers will have many offerings (almost all of them from Asia, and usually very good).  I know of no reason not to start with a BaoFeng brand, or one of its many copies, which can be had with all accessories for under $50 new.  When you know more about radios, if you see a reason to, you can always move up in quality or price by purchasing in the new or secondhand markets.

You don’t have to have any expert knowledge to shop for your equipment.  You don’t have to understand the terminology used in the advertisements.  Here is what you need: a handheld transceiver for the 2-meter band (that band alone is sufficient, but more may be included).  FM is the only communication mode you need; you have no need of digital special modes.  The HT should, however, be able to transmit “CTCSS codes” (you don’t need them for simplex, but you will need them if you choose to use repeaters too — see www.ARRUMBA.net for more information), but any reasonably recent model can.  It should have about 5 to 8 watts of transmitting power, a built-in microphone and speaker, a self-contained rechargeable battery, and a detachable short flexible (“rubber-ducky”) antenna.  It should have a replaceable battery pack, or else have a socket for an external back-up power source.  You will not really need any other hardware, such as hand-held microphone or external speaker, etc.

As for features, make sure there is a squelch control, so you can have the radio stay silent when it is only receiving noise and no voice.  When receiving, you should be able to set the radio to Scan, so it continuously listens momentarily on every available frequency and stops briefly when it finds a signal.  There should be a backlight for the display, so you can see it at night.  You should be able to program your HT, so it only listens on those frequencies of interest; this can be complicated, unless there is a computer connection and software to make it easy — inquire about that before you buy.  Fear not, though: once your HT is programmed, you will rarely have to make any more changes.

A nice extra is the ability to receive standard broadcast signals.  These are often high-power signals, and may let you know what is going on in the world while you are still trying to get your own messages out.  There are also weather reporting and forecasting stations you may find useful.  You cannot transmit back to any of these stations (they don’t listen anyway), but just hearing them may be comforting.

Spend the $60, and start ensuring your ability to communicate outside the system!

Late-breaking news: The FCC has just announced it is considering imposing a $50 fee for those 10-year amateur radio licenses.  If they do, it will probably take a few months to initiate.  Save yourself the $50 by getting licensed ASAP!